The story behind my seats

Well, some times it's worthwhile to check the story behind old things.

The seats I ordered in the US had a funny story behind. It all stated when I ordered the seats. I was told that they where from a old MD-87 which has been scrapped. Once I received them I checked the serial numbers on the seats. It seems that they where produced back in June 1994, and the "pillows" where replaced in 2007. Nothing else was traceable to the aircraft it self.

Nearly finishing the seats, the last part was the armrests. The top was off to be refurnished with new leather. Turned the backside up and some masking tape appeared. A number was handwritten N216AM !!

Hmm. looked like a US aircraft registration number, on the way to Google....

Further on to the history of the aircraft:

A couple of years ago a had a visit from a old colleague who today work as a pilot for SAS. I knew he had flown MD in SAS and was happy about the aircraft so a message to him via messenger, "I have the seats from LN-RMY" do you know that aircraft ?"

And yes, he had flown LN-RMY. It appears that is was a special version with a extra fuel tank of 1200 KG which worked as ballast and was not to use. Quite special fueling the aircraft since it always needed 1200 KGs extra. It didn't have a count-down on the radio altimeter either so special flair on landing.

And yes he had already spent many hours in my seats ;-)

Update of the pedals 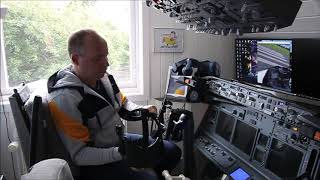